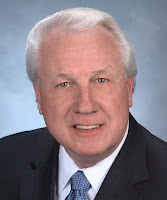 John Sullivan was born in Ansted, West Virginia. He was converted on August 13, 1955; having been led to the Lord by his wife of two months, Nancy Hinson. He was baptized in Congress Heights Baptist Church, Washington, D.C. and was later ordained to the gospel ministry on December 1, 1957, by First Baptist Church, Cupertino, California. He received his Bachelor’s of Arts degree at Grand Canyon Baptist College in Phoenix, Arizona in 1961. Dr. Sullivan received his Master of Divinity Degree in 1968 and his Doctor of Ministry Degree in 1973 from Southwestern Baptist Theological Seminary in Fort Worth, Texas.

Dr. Sullivan has served in church in Arizona, Texas and Louisiana. Since his arrival in Florida, Dr. Sullivan has led our convention to establish three priorities: evangelism, starting new churches and developing existing churches.

Please join me and welcome Dr. & Mrs. John Sullivan to First Baptist Church LaBelle.
Posted by Pastor Frank at 10:00 AM